While attemtping to upgrade from ESXi 6.0 to 6.5, I received the following message from Upgrade Manager:

After researching this message and not finding an answer that could fix it, I called Vmware support and this is what they suggested.

The actual Vmware KB can be found here.

The project was to install MS Advanced Thread Analytic Gateway in a virtual machine, in Vmware, to monitor a physical domain controller.

As mentioned before, host1 connects to switch1, and we’re going to use this connection (vmnic2) and create a new standard switch (that was my setup). So, at point, vmnic2 connects to port 44 on switch1.

Once your new standard switch is created (vSwitch2), then we’ll create a new port group (ATA-Capture). While creating port group ATA-Capture, make sure to enable Promiscuous Mode and set VLAN ID to All (4095) – this part crucial! 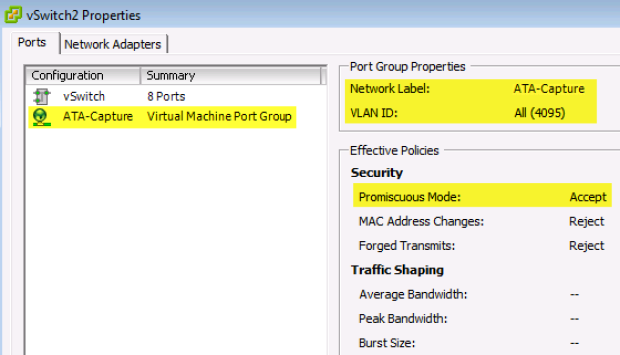 Your MS ATA Gateway will need to have two NICs. One NIC will be used for day to day work and the second NIC for capture. To make thing easier, rename the NIC to something like ‘Capture‘. Next, make sure that your Capture NIC belongs to the ATA-Capture port group.

At this point you should be able to install MS ATA Gateway software.

List All Disks (VMDKs) In A Virtual Machine (ESXi)

Using VMware PowerCLI, PowerShell, there’s a nifty way to get a list of all VMDKs associated with a virtual machine(s).

For this sample, I chose to output the following fields:
Parent, StorageFormat, Filename, CapacityGB and Name
This sample code will provide you something like this: